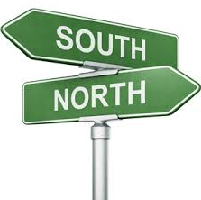 House prices in northern England are now less than half those in the south of the country, according to the Nationwide – a new record.

On average, a house in the North of England is worth nearly £163,000 less than one in the South.

That is the first time on the Nationwide measure that the price has risen above £200,000.

The building society also said that prices were picking up.

In the year to March, house price inflation across the UK hit 5.7% – up from 4.8% in February and the fastest rate for more than a year.

One reason for the increase may have been the rush by landlords to buy property ahead of Stamp Duty increases on 1 April, the Nationwide said.

“The pace of house price growth may moderate again once the stamp duty changes take effect in April,” said Robert Gardner, Nationwide’s chief economist. “However, it is possible that the recent pattern of strong employment growth, rising real earnings, low borrowing costs and constrained supply will keep the demand/supply balance tilted in favour of sellers, and maintain pressure on price growth in the quarters ahead.”

BASTION ESTATES COMMENT: The comment and article summarises the annual change from quarter 1 of 2015 to quarter 1 of 2016. Obviously the market has continued to rise with the obvious regional variations. London, outer London and the South East dominates the growth in the predictable extremes though it will be interesting to see how this may alter in the next year. We do not expect dramatic changes but a levelling of price increases in London would not be a surprise.

The North and Midlands shows its steady gradual growth with the exception of the northern England areas (north east etc.) which is showing a decrease of 1.1%. Again no great surprises, in fact the statistics nicely reaffirm our message of buy in the north, buy carefully and with discount and commit to growth areas with the all-important high rental yields.

We have commented before that southern investors are focusing more interest and subsequent investment in the north due to two simple reasons. Cheaper prices and better rental returns.