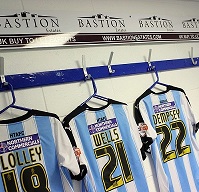 Our on-going association with Huddersfield Town Football Club has been formally announced today by the Club. It’s always good to see Bastion Estates mentioned in the press and trending (to a small degree) on social media.

We first became a commercial partner of the Club in December 2014 after many years of committing to occasional sponsorship and moving this forward to a formal agreement seemed a logical approach. I admit that this decision was probably taken by my heart rather than my head as I’ve been a life long Huddersfield fan and they are our local club but the first year of our formal commercial partnership has been enjoyable, interesting and in many respects good fun. The commercial team at HTAFC are a great bunch and a credit to the Football Club as a whole. With all of this in mind we have renewed our partnership and already have lots planned for the year ahead.

We are running a joint event with the Club in April about the North South property market divide and the push of the #northernpowerhouse focus.

We are also due to chat to the players again shortly about their financial planning and the buy to let property market.